"Target Sprint Cymru has had another fantastic month.

Following on from the Manchester event, the next British Shooting National Series and Superleague events were on 11th May at Exeter College. Attending from Target Sprint Cymru was Emily Shawyer. The weather conditions turned extremely challenging, but the team at Exeter ran the event excellently.
The shooting suffered due to the weather and incredibly strong wind causing trouble for all the shooters to keep their stability when transitioning from the running phase. Then, on leaving the range, the athletes had a short steep upwards climb followed by a continued upwards run as far as the halfway mark, when they had to then run back down over a combination of grass and tarmac surfaces.

In the Superleague event Emily Shawyer came first out of the Junior Women, cementing her dominance of this class with another gold and 10 Superleague points.
Next day, and next stop, Target Sprint Cymru travelled across on 12th of May to the long standing competition at Southampton. This event we have attended for three years now and is a must attend event on the Target Sprint calendar, run by Stephen Bachelor and his excellent team, often attracting international athletes. Attending from Target Sprint Cymru was Emily Shawyer and Paul O'Callaghan. The event moved the range, this year, to an outside venue with the running part consisting of a small tarmac section followed by a longer distance grass section.

Next stop it was the first International of the year and Target Sprint Cymru travelled with Emily Shawyer, representing Wales, to the Italian Open International Target Sprint event in Ora, North East Italy. The team arrived on 28th May with the following day to acclimatise to the increasing heat and humidity. Then, on 30th May, we had Pre Event Training and a chance to meet the other international athletes travelling from Germany, Hungary, Uganda, Serbia and of course Italy.

The first day of competition was on 31st of May and the temperature went up to circa 28 degrees for the team events. This was split into World Tour international teams and club teams. Teams of three were required so we did not have numbers to enter a Welsh team. However, Emily Shawyer's Bavarian club were at the event and put her in their club team.

The result shocked everyone one. First place was the expected Senior Women's national team from Germany, followed in second place by the German junior national team. However ahead of national teams from Germany, Italy, Hungary, etc., plus ahead of all the other club teams from Britain, came the Renholding Bavarian club in third place taking the International Bronze medal position and podium place. As a side note, and demonstration of what a fantastic team performance this was, Emily's individual time (in the team event) was actually faster than the new British Record she was to set the next day! So, the next and final day, saw the temperature rose again to circa the 30 degree mark for the individual event final. Emily Shawyer qualified in first place. In the final it was Madlen Guggenmos (current World Champion) who took gold. Emily Shawyer came in 4th , so no medal, but in coming fourth she broke her current best individual race time to set a new British Record! 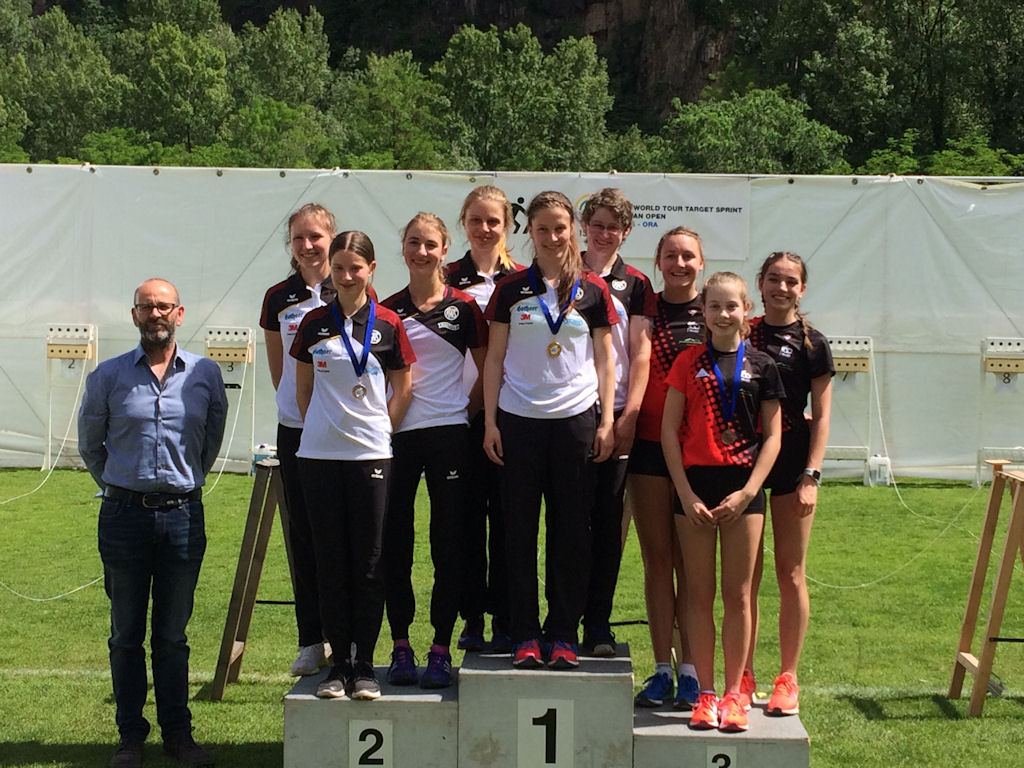 Italy over, the next event for Target Sprint Cymru, is on 30th June 2019 at the Llandovery Regional Centre, starting at 11am. Then we have Emily Shawyer and Paul O'Callaghan, both off with Robert Shawyer (Target Sprint Cymru) taking the GB squad to the ISSF World Tour event in Suhl, Germany travelling from 11 - 15 July followed by the British Shooting National Series and Superleague events, and Welsh Confined and international Open events at Llandovery College on 25 August 2019.

Make sure you book your place so as not to be disappointed."